Guitarist, Tresero and Composer Kevin Connor is a unique voice in Seattle’s Acoustic Jazz and Latin music communities. Originally from Michigan, he arrived to Seattle as an “Owl Hooter” and became quickly immersed in the thriving Gypsy Jazz and acoustic music of the Pacific Northwest.

In the year 2000, Kevin received a grant through Bastyr University to study music and medicine in Cuba. Here he studied Cuban Tres with several of the Cuba’s leading ‘Treseros’ including Emilio Ramos of Sierra Maestra. Upon his return he founded the SuperSones, a Cuban Son Sextet now considered one of the leading Son groups in the United States.  Kevin is also an original and current member of the acoustic Gypsy Jazz ensemble Hot Club Sandwich and regularly performs and records with this group. His compositions and arrangements can be heard on all 5 of the Hot Club Sandwich recordings including their recent collaberation with David Grisman.   In 2013 Kevin received a Seattle City Artist Grant to compose and record an album of original compositions. His debut album Tres and Guitar has received excellent reviews and radio play around the country. 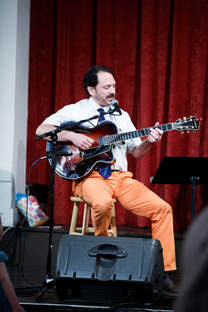 Kevin has performed and recorded with David Grisman, Dan Hicks, Patty Larkin and many of the leading Gypsy Jazz players from around the world. He is an avid composer and accomplished vocalist. His compositions have been featured on TV and radio, including NPR’s all things considered where 'Gaucho' was used as interlude music. His composition ‘Diminishing Returns’ was the theme song for the independent film ‘The Pez Dispensar’.

Kevin also leads his own dance oriented Swing group, Swing 3P0 where he features waltzes, original compositions and vocal stylings in the spirit of Nat King Cole, Freddy Taylor and Slim Gaillard.   Kevin enjoys playing for dancers of all ages and has a special knack for getting kids to laugh and dance. He maintains an active performance schedule which includes Sunday evenings with Swing 3PO at Seattle’s Tutta Bella pizzeria.
Kevin Connor
info@kevinconnor.net
(206) 427-6669
2306 28th Ave S.
​Seattle WA 98144